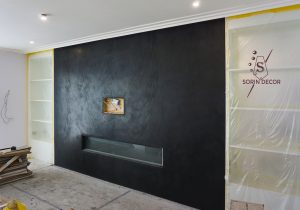 In the last decade, homeowners and interior designers contemplating painting and decorating their walls and ceilings are finding that they don’t necessarily need to rely on artisans to make their home or commercial buildings look like a Roman villa.  Polished plaster is a generic term referring to the various decorative finishes that can be created using the original Italian plasters or the plethora of new and improved plasters that are being created.  Polished plaster is making a resurgence in popularity primarily because it’s becoming readily available, and it’s much easier to apply.  People don’t need to rely on artisans whose recipes have been handed down from one generation to the next to source a supply of polished plaster that they can use.  Polished plaster comes in virtually as many colours as paint.  And with the advent of the internet, people can now watch as many “How To” demonstrations as they need to learn how to apply it.  With just a little effort, a homeowner can now create and enhance the look and value of his home in ways that only the very wealthy could afford a century ago, or an interior designer can use one of the businesses popping up all over to provide their customers with a classic Greek look at a fraction of the cost.

The original underlying plaster is known as Venetian plaster, which is essentially a putty made by mixing fired limestone with water, and it makes a lime plaster, also known as Venetian plaster, that reacts with carbon dioxide in the air, once applied, to form limestone again.  Essentially, this creates a layer of limestone on the wall.  By adding marble dust, a polished surface could look like a wall of marble.  The original Venetian plaster was applied by adding layer after layer onto the surface and polishing it, referred to as “burnishing,” to produce a specific texture.  Other materials like sand or granite can be added to the plaster to provide a virtual spectrum of plasters that have their unique texture, appearance, and application.  One of the more well-known plasters includes marmorino dating back to ancient Roman times.

Along with the limestone, craftsmen added ground terra cotta, stone, and marble, creating a plaster that also had some uniquely water-resistant characteristics making it extremely useful on exterior surfaces and interior rooms like bathrooms and kitchens where water was present.   There are virtually thousands of different plaster recipes available, but they don’t include the indigenous varieties that experienced craftsmen produce to create a unique texture and appearance.

There is evidence of plasters being used near Mesopotamia and what is now the Middle East as early as 9000 BC.  Recognizing its excellent water-resistant properties, the Ancient Egyptians are generally credited with developing the use of polished plaster in their architecture.  Around 900 BC, the use of plaster spread to Europe and other civilizations around the Mediterranean Sea.  The Greek and Roman cultures were flourishing during this era, and they proceeded to experiment and improve on it.  The technique of adding marble dust to produce an extremely durable, smooth, lustrous finish was used until the fall of the Roman Empire and was not rediscovered until the Renaissance period.  During this period, the application of plaster became the primary cover for the interior and exterior of buildings, which explains why there are palaces and cathedrals all over Europe over five hundred years old.  With the Roman Catholic Church in power during this era, it’s not surprising that the Venetians were recognized as the most skilled developing the recipes and techniques used around the rest of Europe.

Find out more or adjust your settings.

This website uses cookies so that we can provide you with the best user experience possible. Cookie information is stored in your browser and performs functions such as recognising you when you return to our website and helping our team to understand which sections of the website you find most interesting and useful.

Strictly Necessary Cookie should be enabled at all times so that we can save your preferences for cookie settings.

If you disable this cookie, we will not be able to save your preferences. This means that every time you visit this website you will need to enable or disable cookies again.